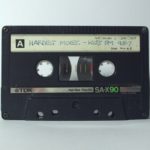 London’s Pirate Kiss FM began broadcasting illegally on 94fm on Monday 7th October 1985. Three days later Colin Faver played this mind-blowing scratch-mix on the Thursday evening.  Heaps of raw roughness in this beautiful beast. Thanks to Colin Faver for playing the request and the Aero shout out – you are sadly missed…

Use the player’s forward and back buttons to hear all three versions.

UPDATE: Finally ID’d this mix!  It’s a 1983 recording named SHADOW 1 by Aldo Marin – DJ at New York’s WKTU92. He co-founded Cutting Records, the label that released Hashim’s Al-Naafiysh (The Soul). So much great music has come from this guy. I’ll publish a whole article on Aldo Marin soon, when I get tiiiiiiiiiiimmme…

Would love to hear your thoughts on this mix, or info about KTU or Marin. Please leave a comment or get in touch.