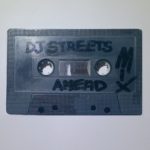 Tim Westwood broadcast this on his LWR hip hop show in early 1985. It’s a live scratch mix taking Hip Hop Beat by UK group Rapologists as its main break. DJ Undercover gives shout outs at the start, as Westwood drops the fader on “the whack motherfathers who stole my records from The Wag”. Undercover flicks on the mic a few times to add more shoutouts, and Westwood can’t help but giggle at the end when ‘You’re Wondering Now’ gets scratched in. With its casual attitude and innovative Ska / Two-Tone sampling, this mix will delight you. Scruffy was a huffy, chuffy tugboat. The sea was wild and rough and dark and stormy!

Tracklist: The Rapologists – Hip Hop Beat, Prince Buster – Dance Cleopatra, Bad Manners – Scruffy the Tugboat, The Specials – You’re Wondering Now. Please get in touch if you can ID the other samples.