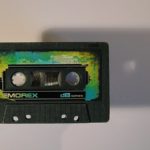 Got this off Colin Faver’s Kiss 94FM show in 86, and tracked it down years later on MP3Genius’s FTP server. Russ is one top bloke, turned his PC into the baddest server on the whole damn network. Respect is due, respect to you. Listen to both recordings on the player below. The other four Jams will be uploaded, so keep it locked.

Tracklist: Cameo – She’s Strange, Malcolm McLaren – World’s Famous, The Art Of Noise – Beat Box, Evelyn King – Shake Down, Klymaxx – I Need A Man, Hashim – Al-Naafiysh (The Soul), Newcleus – Jam On It, Orbit – The Beat Goes On, Midnight Star – No Parking On The Dance Floor, Pretty Tony – Fix It In The Mix.