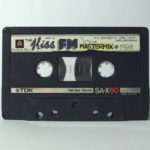 Recorded from James Alexandra, a pirate broadcast on 88.6fm, which was either Starpoint or Community Development Radio. It’s a rough mono recording due to interference from BBC Radio 2 (!). Track choice makes for a nice hip hoppy mixer, all the classics from 1986 with a bonus Delbert Wilkins sample. Thanks to mix expert Marky for naming this one. It’s “a DMC Mix  : P   DMC 040 June 1986 – Dutch Treat – Mixed By Orlando Voorn (International). It was a not too clever recording on the album, he created that mix in his bedroom hence the quality isn’t up to par but still DMC put it on”. It’s true, the vinyl copy is distorted from too much cranking in that Amsterdam bedroom. Have a listen to both versions below.