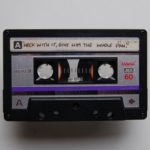 This was a 1986 broadcast from London’s pirate Kiss 94 FM, recorded onto a beautifully crafted cassette – the Maxell Metaxial MX (position Metal). Dissappointingly the tape wasn’t actually made of metal, but a magnetically coated polyester-type plastic film. But think how cool it would be to have actual metal tape. Think of the finger cuts. Anyway my Walkman seemed to like the taste of this particular one and chewed it up good – hear what it spat out below.

A decision was made not to include the mix on this site due the horrendous quality. Later that day Shaun Dowling got in touch and sent an mp3. By a staggering coincidence it was the same mix that had been disregarded just hours earlier. Shaun named it too – it’s part of the New York Scratchmasters series. Brilliant syncronicity. Thanks.

Additional: the above chewed up tape noise was broadcast on London’s Xfm by James Hyman.