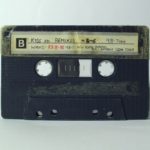 Live and direct from the A1 King Discoteque, this is the Battle for World Supremacy at the 1986 New Music Seminar in New York. Featuring Jazzy Jeff, Chad Jackson and Barry B from the Get Fresh Crew, it’s old school DJ turntablism at its most raw. Seems that there are plenty of NMS tapes and videos now on the internets, but recordings of the 1986 Battle are absent. Apart from this tape, played by Tim Westwood on LWR.

Spoiler Alert: Chad Jackson didn’t win. He went back to Manchester, with his head in hands, and tail between legs. HO!!!

UPDATE: It’s amazing to find alternative recordings of radio shows. Knowing that someone way back in the past also had a cassette rolling at the same time as yourself. Much respect goes out to Dutch Old School Fan for sharing many radio shows on his incredible blog. What a goldmine. So first on the player below you get my LWR recording, followed by his extended one with more of Westwood speaking. Thanks for leaving the tape rolling!