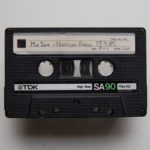 Tapes were rolling across the capital on Friday 13th September 1985, with tuners locked into 94.5 FM. Barry Jones broadcast his last drivetime show on Horizon Radio, one of London’s top unlicenced stations. Clearly a fan of the Disco Mix Club megamixes, Barry played one each and every weekday evening at 6pm in the feature known as The Mix at Six. For his final show he played seven of them. Here’s a fab Go-Go mix produced by Sanny X, included on the March 1985 DMC Mixes LP. This TDK cassette also has some nice final shout outs and jingles which will be available on this site in the near future. But if you can’t wait, check out Karen Stevens’ tape of Barry Jones’ last show – go to Horizon Radio’s website here.