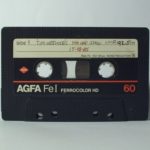 Well here’s a jagged cut-up of Herbie Hancock’s ‘Rockit’, found on an old Tim Westwood show cassette. Broadcast in 1985 during Tim’s LWR days. Bedroom DJs sent in their own mix efforts to 37B New Cavendish Street and Tim would play the best ones. Not sure how this one got airtime though, the mixing is dreadful. It syncs without a trace. The DJ is constantly playing catch-up, he cuts to the chase, then mercifully he stops.

Please let us know if it was your limp mixing hand that created this rotten bit of noise. Don’t worry, your name won’t be published (yes it will).