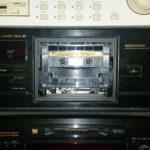 Summer in Brooklyn, 23rd August 1985. DJ Red Alert is going berserk on the Jerry Young show, 98.7 Kiss FM’s mastermix dance party. Shoutout to Sandeep Sharma for recording this while on holiday in New York, and for the loan of the tape when he returned. Standby for the chew FX at 30″ – the tape snapped on its first play for 15 years. There’s some more vintage Kiss to follow – leave a comment below to get a (red) alert when it’s uploaded.