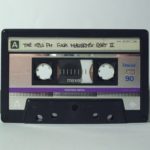 Captured from the Mixdoctor’s show on Solar Radio sometime in 1986. This is an awesome mix. Originally believed to be “The 31 Track Megamix by Les Adams”, but after a few days of it being on this site Marky DMC emailed the correct artist and title. Les Adams responded to confirm that it was indeed created by Alan Coulthard and is on the Disco Mix Club October 1984 mixes LP. Many thanks both of you for the info, and big up Marky for supplying a clean copy of it too. This was used to fix the radio recording which had an erase accident near the end. As a bonus you can also hear Marky’s vinyl version on the player below.

Back in the 80s Les Adams ran a competition to name all 31 tracks. And in 2008 this website did the same. The first person that could name the 31 track names AND artists would win a Richcolour Tape & Biro T-Shirt. Entries from Alan Coulthard were valid, however it was Jepi that won. Here are the results of some excellent audio detective work:

So this is the most complete tracklist we have. Can you help fill the gaps? Leave your comment below.